skip to main | skip to sidebar

St. Michael’s Catholic Church was founded in 1882, but the church that is present today was not finished until May 15, 1892. This church was built in the old European-style, reflecting the style of church seen by many of the immigrants in their European homelands, with solid walls made of numerous rocks, which were actually imported from Germany, tall stained glass windows, and a steeple, which reached to the heavens. Later additions to the parish including buildings for the grade school, confirmed classes graduated as early as 1891, and a convent.

The congregation remained the same for the remainder of the 19th century and the first half of the 20th century until unlawful “block-busting” techniques were used by real estate agents and the crime rates began to rise as the majority of the older German population moved further out to the suburbs in the late 1970’s and early 1980’s. This shift in population left St. Michael’s congregation numbers to dwindle. A new mixed population moved in, made up primarily of African American, Spanish, Laotian, and Hmong, the last two ethnic groups which were primarily made up of refugees from the Vietnam War. This transition in the neighborhood’s demographics not only sparked a change in the area, but also a change in the church’s priorities moving forward.

During this time of transition, both the overall crime rates, in general, and hate crimes, against the Laotian and Hmong, reached their peaks. However, over time the church coupled with the local police department, neighborhood residents, and several other organizations began to turn things around. With the change in priorities for the church and the overall effort to clean up the neighborhood, not only crime wise but also sanitary wise, it decided to give up both the school and convent. These buildings did not go to waste; however, as the school was soon under new management as Urban Day School and the convent was turned into a building used by Hmong and Laotian women for various activities.

In 1994, the church helped organize the Allied Churches Teaching Self Empowerment (ACTS) organization, which mission is to “increase affordable homeownership and improve central city housing stock through affordable rehab. Supporting low-income families in these ways builds their ability to be self-empowered, and increases the viability of central city neighborhoods.” By doing this, the church strengthened the community as a whole bringing people together who wanted to work to keep their neighborhood both safe and clean.

St. Michael’s is currently the only church in the Milwaukee Archdiocese, which has mass in four different languages, Lao, Hmong, Spanish, and English. It is arguably the most diverse congregation in the archdiocese, having members from almost every ethnic background from around the globe.

The staff keeps busy every day of the week helping to organize various social events throughout the year, working with ACTS, and to help newly located immigrants from Southeastern Asia. The various social events include a semi-annual eggroll sale that not only help to raises funds for the church, $19,000.00 in the most recent sale, but also bring the community closer together. The staff continues to help new immigrants from Southeast Asia, especially Sister Alice Thepouthay and Blong Yang, grow accustomed to the American lifestyle, which Sister Thepouthay refers to as “the double struggle of language and poverty”.
Posted by Andrew Tilley at 10:01 PM 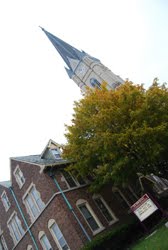 Get to Know Your Author

Andrew Tilley
West Allis, Wisconsin, United States
Andrew is a a current UW-Milwaukee student majoring in Accounting. He graduated from the Marquette University High School in 2006, and previously attended St. Matthias Grade and Middle School, graduating from there in 2002. By attending both MUHS and St. Matthias, the need for service in the community was instilled in his life from a very young age. In this blog, Andrew will cover both service oppurtunities and the different types of service currently going on in the Milwaukee area.